We recently visited Belfast, the capital of Northern Ireland, and one of the venues on our list was The Game of Thrones Exhibition.

It appears relatively new and situated outside the city centre, about a 15 minute bus ride. The Titanic exhibition centre is also close by.

Not the Biggest Fan

So what did we think? Well, I did watch the show, although I’m not the biggest fan. It would be pointless for me to enter a quiz about it, for example.

The GOT exhibition centre is about another ten minute walk from the Titanic exhibition. From the outside it has the appearance of a large warehouse in an industrial quarter.

Nearby are some of the scene constructions from the show, though these are partly hidden from view behind a fence which you can’t get through. 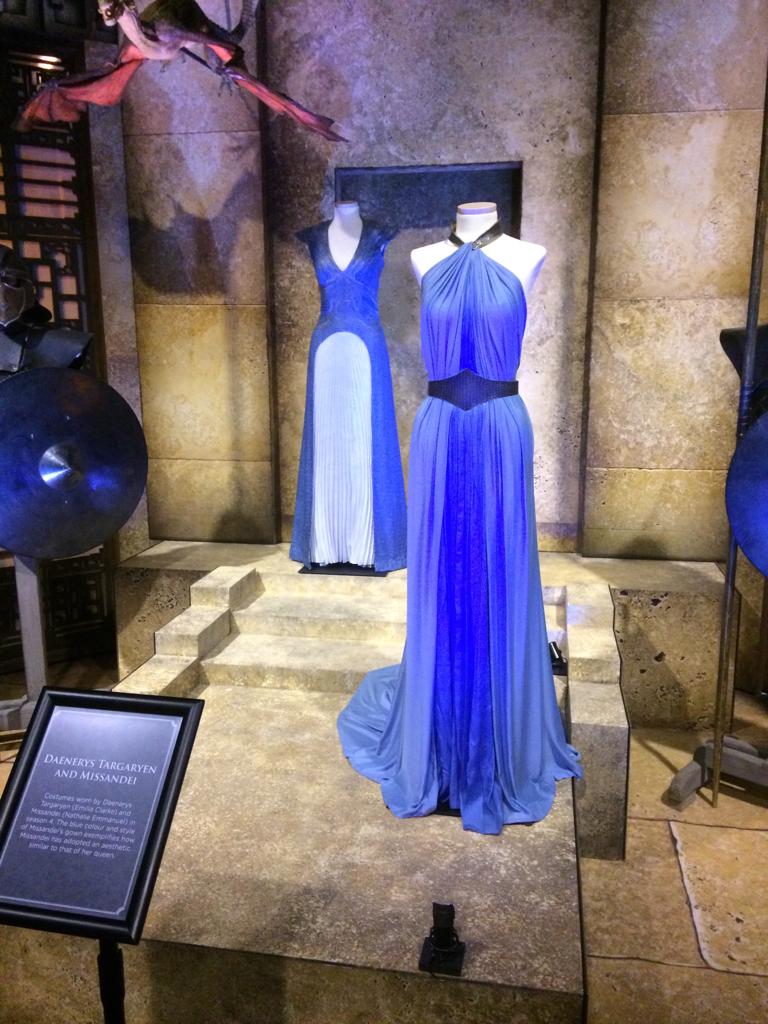 On the day we went, it wasn’t very busy. It was wet and the school holidays are still a little way off. We were greeted by friendly, enthusiastic young people, most of whom we were told, were either extras in the filming or had been involved in some other way.

In fact, it turns out that a significant percentage of the Belfast population have had some involvement in the making of the biggest TV show ever.

Boon for the Local Economy

Many millions of pounds have been generated for the local economy and one of the largest and continuing benefits is tourism.

Once we had got our tickets – £17 pounds each, I might add – we were shown a short film, like a precis for the whole 8 series. We were the only people watching it.

Then we were ushered through and entered the exhibition itself. Inside it’s large and dark, so dark that taking pictures (allowed) is not easy, as they don’t like flash photography. 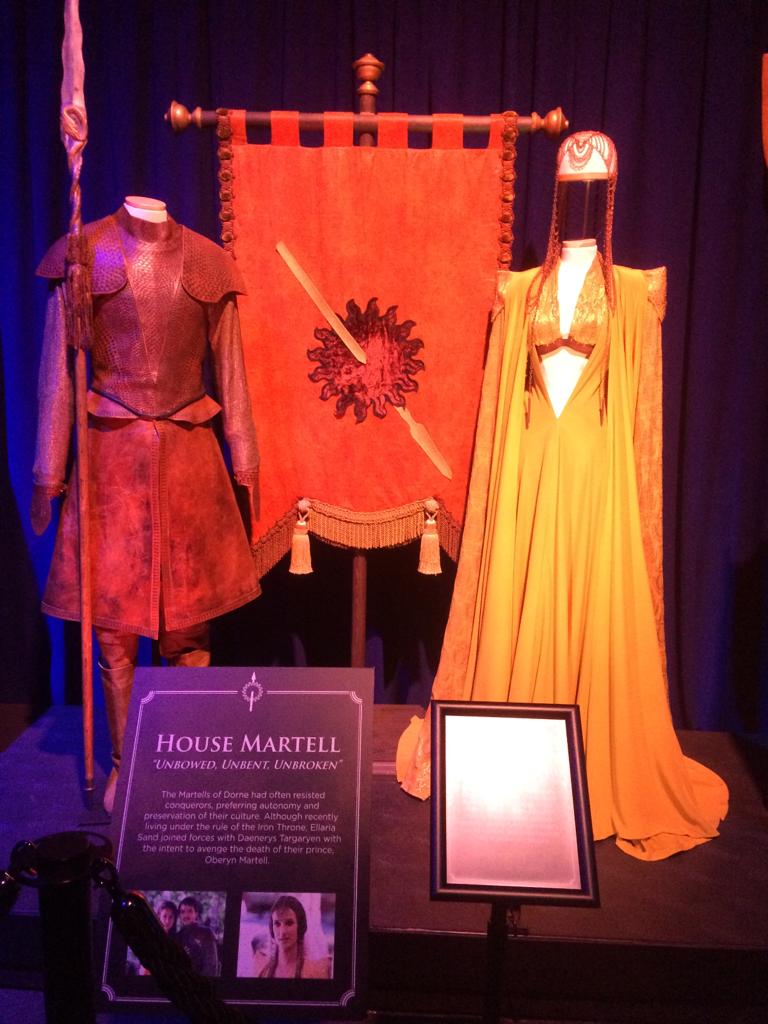 What we saw were basically numerous sets of costumes of the individual characters of the show, from the white walkers to Daenerys.

There were also large dragon skulls, which made the best use of the darkness within the huge hall; there were reconstructions of scenes from the Stark crypt and also interactive areas where you could, for instance, have your picture taken on the Iron Throne – at extra cost, of course.

What I enjoyed best, however, was the map. I’ve always been fascinated by maps and spent a significant proportion of my youth making up fantasy islands or lands – maybe I should have had a pitch at writing a story about them!

We got around the whole exhibition in around half an hour, though a real enthusiast, which I’m not, might take 45 minutes. At the end there was the usual gift shop with the inflated prices which we quickly bypassed.

So, overall, what did I think? It was OK, but I think we both left feeling a little underwhelmed.

Don’t get me wrong, Belfast and Northern Ireland in general deserves all the benefits this show has brought, the employment, the massively increased tourism, but I had the feeling that the exhibition had been put together quickly and it showed. 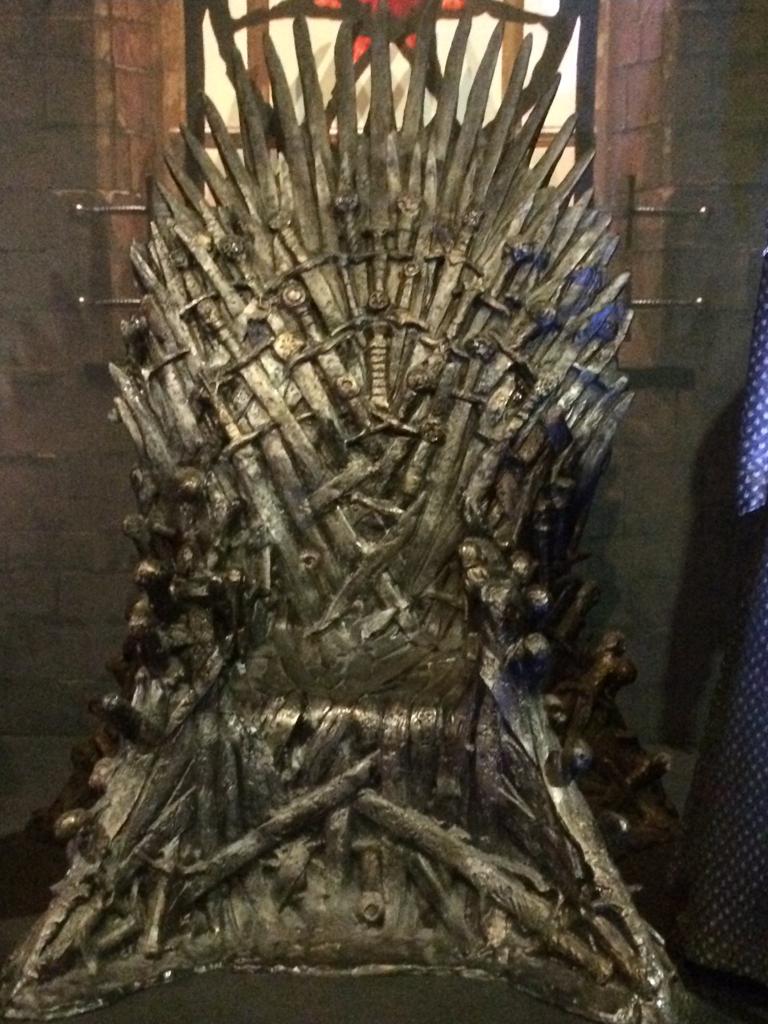 That said, how elaborate should it be? It could be argued that the large dark space of the centre/warehouse was the perfect setting, complementing the dark mood of the show.

Ultimately though, having been around it now, I don’t think it’s worth what we paid. Ten pounds would have been more reasonable, I think.

If you are a real fan, however, then I’m sure you’ll enjoy it – whatever the cost.

2 thoughts on “The Game of Thrones Exhibition, Belfast”