One of the biggest Hollywood blockbusters ever was premiered this day, December 15 1939, at Loew’s Grand Theatre, Atlanta. It is thought that around 300,000 people in Atlanta came out in celebration.

The film tells the tragic tale of a southern family’s struggle and disintegration during the ensuing melee of the American Civil War, which took place between 1861 and 1865.

Gone With The Wind has an iconic cast of stars, including Clark Gable, Vivien Leigh, Leslie Howard and Olivia de Haviland and remains highly popular today.

Kirk Douglas died in February this year. Recently terrestrial television screened the video of his Hollywood break-through film Champion (1949). Douglas played the title role of Midge, a boxing champ driven by ambition. Throughout the film Midge is ruthless in the way that he uses people to climb to the top. But it is not […]

One of Humphrey Bogart’s most famous films, and the one where he flirts with Lauren Bacall whenever they are on screen. This has always been Casablanca Lite, in my book. Both films have heavy atmosphere, quirky characters, a piano-playing pal, Nazis, a world-weary American who doesn’t want to dirty his hands with current politics. To […]

What Is Classic Remarks? Classic Remarks is a meme hosted here at Pages Unbound that poses questions each Friday about classic literature and asks participants to engage in ongoing discussions surrounding not only themes in the novels but also questions about canon formation, the “timelessness” of literature, and modes of interpretation. How Can I Participate? […]

*** Very good and interesting discussion here. There is still a lot of scope for adaptation in the realm of classic literature to make classic films! 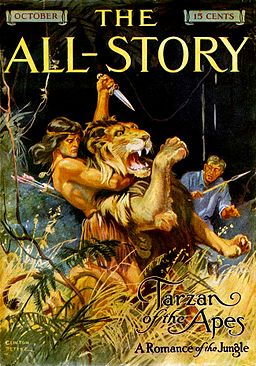 In astrological terms the birth chart speaks for itself.

Leo rising with Neptune right on the ascendant. There are several movie stars with prominent Neptunes such as this, the ‘outer planet’ probably adding a certain mystical glamour to the individual’s prominent appearance. Leo loves the limelight and Neptune will attract through the power of film, a very ‘Neptunian’ medium. For some reason, certain faces look good on celluloid and this was no exception.

Added to this we have a fairly tight Sun Mars conjunction in Taurus in the 10th house of career. Here we see the imposing, handsome 6ft 4in physical presence too, strength, bravery, determination. Taurus is solid, stubborn, yet sensuously attractive with Mars so close to the Sun. He rose to the level of Major in WW11 and was injured in Sicily.

This same determination drove him in his movie career, where allied with Mercury in Aries conjunct the Midheaven trine Saturn in Leo, he enjoyed a very varied, yet sustained career, playing most famously in Tarzan of the Apes, movies of Karl May’s novels, Westerns and numerous European films later in his career.

His linguistic abilities (he could speak Italian, Spanish, French and German) are also indicated by Mercury’s prominent conditioning; he was able to utilise this ability in his career.