It was an alien landscape, in red-brown Martian hues, but built of boulders older than the skies have known the blues — or so the locals always said. But no man knew those views. They date to days primordial — before artist or muse.

*Fascinating material which should be taken more seriously in my view. Find a book along these lines here. 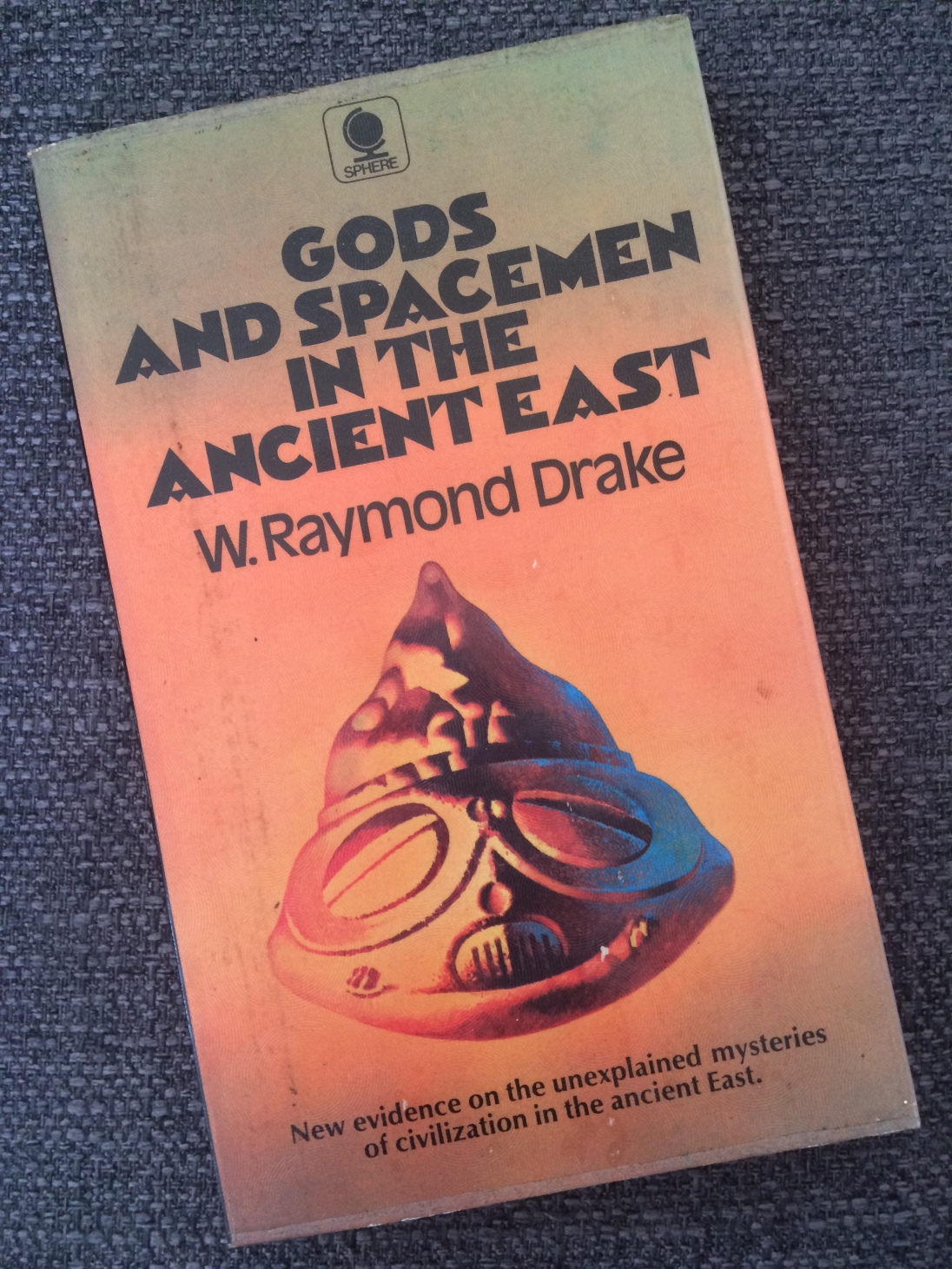 Back in the early 1970s when I was a teenager, I grew to love this kind of book. I, like many, was fascinated by ufos, aliens and space, that maybe the myths of the Greek gods were a retelling of ancient visitation of spacemen from other worlds.

Such books would have been scorned by my history teacher, yet these were far more interesting to me than the learned tomes we were supposed to study for O level.

This is the one I bought in 1973, which, as you can see I covered with plastic, as lovingly as any schoolboy would cover a textbook. It’s in very good condition.

Of course it was Erich von Daniken‘s famous book ‘Chariots of the Gods‘ which had really fired my imagination a little earlier. Although he was to receive much criticism from both the scientific and religious communities, I still believe there is much to be learned from his books and from other authors like Drake.

I recall one school assembly put on by some pupils around 1973 which even brought up the subject of ancient aliens. Was God and astronaut? The following day the headmaster took to the stage himself and attempted to shoot down the theory in flames. Despite this, the theory is still out there and as popular as ever.

The great thing about Drake’s writing is that whilst he is clearly learned, he writes in such an accessible way – it had to be for me to read it! I particularly enjoyed the chapter about the Ramayana of ancient India and his interpretations of it.

The general thesis of all these books is that extraterrestrials have visited ‘our domain’ in the past and have effected the course of human civilisation, perhaps even to the extent of altering our DNA through one method or another.

For me it is a wonderful adventure, and even if not all of it is true, it is highly entertaining, nevertheless. One qualification I would insert is that the understanding of the word ‘extraterrestrial’ has become more complex in recent years. I am quite sure there are other dimensions to reality, and that ours is only one.

Therefore the origin of these interlopers, whether they be in spacecraft or not, could be from the same third dimension as our own, or from the fourth or fifth dimensions, the latter which may surround us invisibly.

I think it’s important for us to keep an open mind, to explore and yes… to imagine.

Was this planet really visited by space travellers from the star Sirius in the ancient past?

This is the question posed by author Robert K. G. Temple. His book, ‘The Sirius Mystery’ (Futura 1977) is another of my favourite books from yesteryear. I remember the day I bought it, in a train station, the arresting cover drawing me to it. I still thoroughly recommend it to anyone interested in the possibility of ‘ancient aliens’ and human culture in general.

It’s a complicated book that you have to persist with, though it’s well worth it, and this paperback has very small type, which these days would not add to the reading enjoyment. Nevertheless, although several decades old now, it’s still in very good condition. I’m kind of good with books that way.

The starting point of the book is that it seems the Dogon tribe of Mali (former French Sudan) in west Africa, have sophisticated astronomical knowledge of the star Sirius, which is in fact a binary star, that is, two stars spinning around each other; it takes Sirius B (the dense smaller, actually invisible companion to Sirius A) around fifty years to orbit its larger, very bright sibling. Sirius itself is important to mythology in general, particularly in ancient Egypt, where its rising was used in the timing of the flooding of the Nile; it is often called ‘The Dog Star’.

The work of French early twentieth century anthropologists Griaule and Dieterlen forms the basis of the main evidence for the book. They spent much time with the Dogon, unravelling their art, culture and mythology which embody this knowledge. It’s from this that the startling information about the Dogon’s knowledge came.

But to boil it down here for simplicity’s sake, how is it possible for the Dogon, in fact any people on earth, to have what appears to be complex, accurate knowledge of far off star systems, without telescopes, or without going there themselves? After all, it was only in the twentieth century that knowledge of Sirius’ invisible companion star came about, using modern, sophisticated telescopic technology.

Ruling out co-incidence, or that the Dogon could somehow remotely see Sirius B orbiting Sirius A light years away, what possible conclusions can we come to, apart from someone else giving them that information?

It transpires from the work of the anthropologists that the Dogon do describe what we might today call aerial craft, possibly spacecraft, their various states of ascent and descent as seen from the ground. There are even suggestions that the being(s) on board these possible aerial ships, was called ‘Nommo’ and that he might be semi-aquatic, due to tribal drawings.

Interestingly, this description and knowledge does appear to link up with ancient Mesopotamian/Middle Eastern mythology, which describes similar ‘craft’ and ‘beings’, who imparted their knowledge to ‘primitive’ mankind.

So, as the saying goes, there’s a lot of smoke here, but where’s the fire? The evidence, such as it is, is highly persuasive. But do we need to re-examine it? Are we in danger of being guilty of imposing our own (modern Western) notions and sensibilities on to different cultures?

The truth is, I don’t know. Twenty years ago, I was pretty much a full on believer in extraterrestrials and this was one of the best ‘go to’ books for ‘proof’ of them and their hand in humanity’s development.

Now, having re-read the book again in recent years, it’s still one of the best in this category you can find. Even so, as fascinating and well written as it is, I keep an open mind about it all.

I suppose it’s asking a little too much to demand aliens to disclose themselves, but if they’ve always been here, with us, then there’s nothing to disclose, is there?