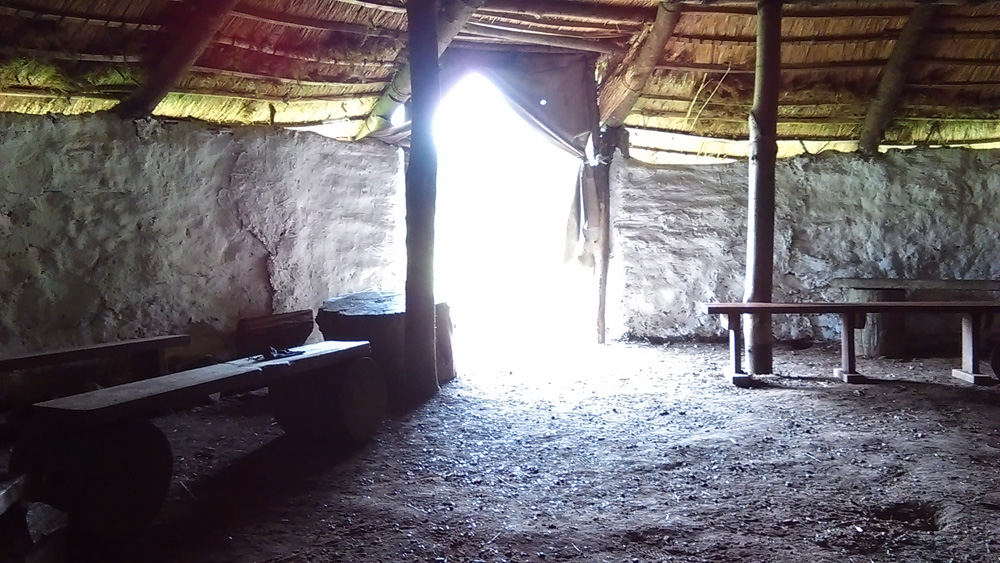 Providence recently took me to Flag Fen, a three and half thousand year old Bronze Age site in eastern England. What began in a field several decades ago with the discovery of timbers from an ancient causeway, has now transformed into one of the most significant archaeological sites of its kind in Europe.

Flag Fen lies at the fen edge, where the flat lands of the south and east meet with the higher ground to the west. It would have been a rich, much sought after environment then, one the most abundant in Britain at the time.

In those days the fenlands afforded a welcome bounty, an alternative to the interminable forests which had still not been extensively cleared. There would be fishing and fowling in the winter; in the summer as the water levels dropped, massive areas of pasture became available for sheep and cattle to graze on.

I’d been to Flag Fen before maybe a couple of times, though certainly not in the past fifteen years. It has changed of course, there is more to see and do. It even has some of its own Soay sheep to give it that authentic Bronze Age feel. But can we truly feel it?

What I enjoyed the most was the roundhouse reconstruction. That probably goes for a lot of the visitors, too. Yes, it’s only a reconstruction, but common sense tells you that it’s probably pretty accurate. Less accurate were my initial feelings towards these ‘primitive’ people who had to live in such dwellings. Standing before it, there was an odd sense of familiarity about the building. The roundness is, well, homely. It’s dark inside but not depressing, nor suffocating. In the summer it would be a welcome shelter from the sun and the heat. In the winter it would be a shelter from the cold with its wattle and daub walls, turf roof and warming fire. All year round it would simply be a welcoming family home. This would be one of the best alternatives to caves, which offer the same benefits of cool summer shade and warm winter shelter, a more organic and equable way of living through the seasons. It was natural, more efficiently heated than any modern house, even with the earth floors. And by the way, organic was the rule then, not the expensive exception of today.

But ok, so none of these people who lived at Flag Fen were literate. Yet they had a sophisticated working language, intimate knowledge of the seasons and the sky at night. Yes, life was very hard, brutal at times, and most often quite short. However, there was clearly a meaning to their existence. How many of us can say that about ourselves? The wooden causeways they built, the votive offerings of broken knives, swords, spears and other valuable items, they cast into the water either side: They genuinely believed a different dimension lay through and beyond that water. A dimension they inhabited after their death.

And who’s to say they are not right?

They experienced life directly, first hand. There was no TV: They had no news to listen to, no game shows or soap operas to watch, no video games to inure them to life’s crazy extremes. There were few distractions to prevent them from contemplation, the storytelling during the long winter nights. We can only guess who their heroes were. It was a harsh world, a verbal world. A real world. Do we live in a real world, or is it just different?

Neither was there any excuse not to pull your weight during the seasons: You either harvested, pulling together, or you starved. Everyone was involved, you invested your energy into your own community. You depended on your family, your community and vice versa.

So, would I swap my existence for one three thousand five hundred years ago on this piece of fen edge? Probably not, but I came away thinking that these people, invisible now, yet tantalisingly close at hand, were more than my equal. I feel I could learn a lot from them, discover something more meaningful in my own life, something better than merely typing these vain words, casting them into the ether. At least that Flag Fen farmer cast seeds that grew, caught fish to eat, slaughtered his own livestock. By comparison I feel almost like a pale shadow, whilst he positively interacts with his environment. So is there anything worthwhile I could teach him? I can’t think of a thing.

Perhaps we should reclaim (while we can, if we can) some of the practical, timeless knowledge we have lost, effectively go one step back to go two forward. It’s certainly foolish, arrogant of us to believe that Bronze Age men were in any way inferior to ourselves.

One thought on “What Goes Around”