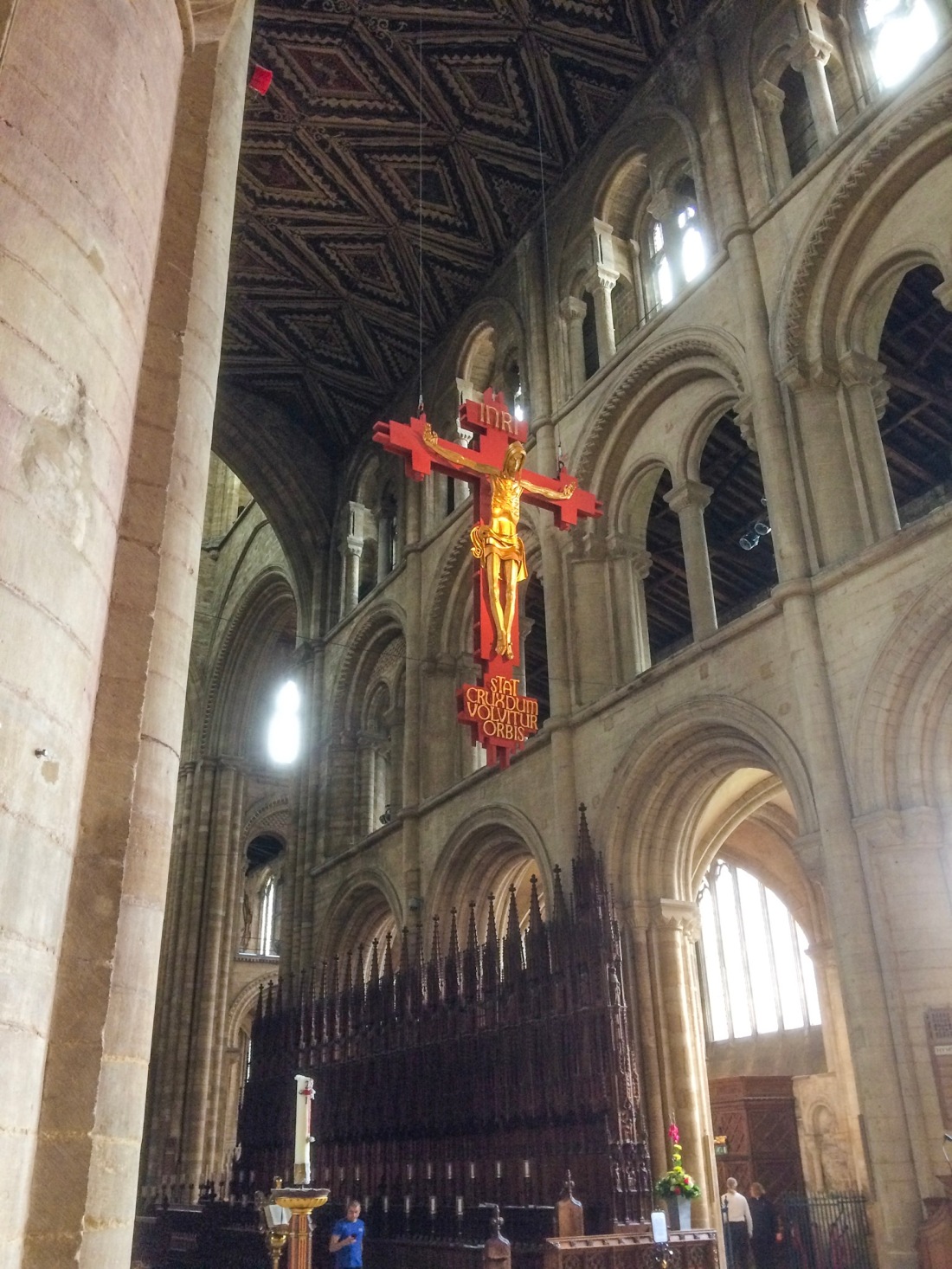 Peterborough Cathedral in the east of England is one of the country’s biggest and most beautiful churches, with an association with two famous queens.

The long nave is quite stunning, with a beautiful roof and with a modern golden image of Christ suspended high as a focal point.

The cathedral is dominated by Norman and early English architecture, with numerous examples of Norman arches, such as these interlacing examples above.

The cathedral is also notable for its association with two famous queens.

The first was Catherine of Aragon, Queen of England when she was married to Henry VIII. Catherine was buried here in 1536 and her tomb is still something of a shrine to her memory, with pomegranates very prominent as her symbol because the fruit appears on her badge. Pomegranates are an ancient symbol for fecundity and regeneration.

Catherine certainly suffered much during her husband’s long and protracted break with Rome, in which she was the innocent victim, her only crime it would seem was not being able to produce a living male heir for Henry to perpetuate the Tudor dynasty. This was how she was treated after being completely dutiful to the king, but Henry had to have his way. Her motto, which translates as ‘humble and loyal’, is a phrase she very much lived up to.

The second queen associated with Peterborough Cathedral is Mary Queen of Scots.

Mary inherited the Scottish throne after only a few days of being born, thrusting her into a world of political intrigue and shenanigans which she was never able to control.

She essentially became a pawn of more powerful rulers and some despicable characters. However, in 1559 she duly became Queen Consort to Francis II of France, solidifying Scotland’s long alliance with France.

Sadly within 18 months the young kind died prematurely. Had he lived, Mary’s life would have turned out entirely differently. As it was, she became a teenage widow and a long series of political and personal disasters ensued when she returned to Scotland. Eventually she fled to England and came under Elizabeth’s control.

After many years’ imprisonment in England, during which the still substantial Catholic faction within England with aid from Spain continually conspired to depose Elizabeth and put Mary on the English throne, she was finally executed at nearby Fotheringhay Castle in 1587.

She was initially buried in Peterborough Cathedral, but her son, James I of England, had her remains transferred to Westminster Abbey in London.