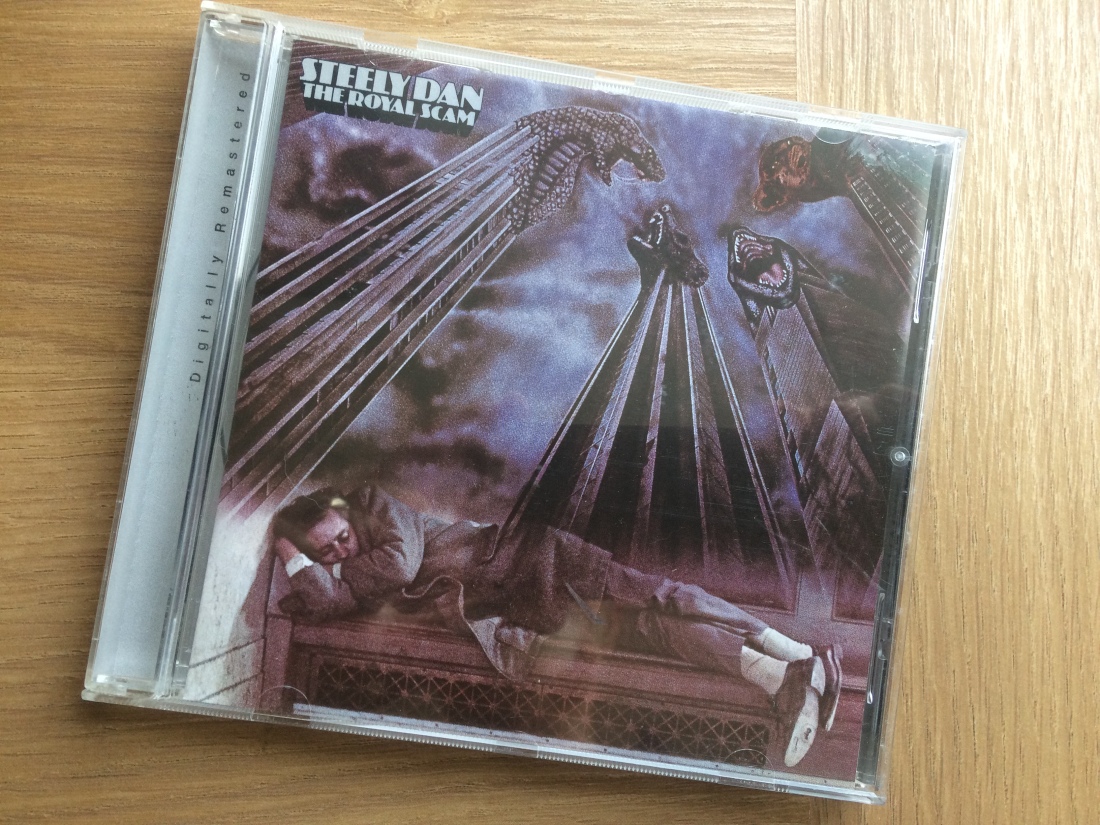 If I am ever forced to live on a desert island (not a love island), and can only take one Steely Dan album, I would choose their fifth released in 1976, ‘The Royal Scam‘ (MCA).

Although often called their ‘guitar’ album, largely because it contains some fabulous guitar solos by the legendary Larry Carlton, and others, it wasn’t the easiest choice for me to make. The problem with Steely Dan albums is that they are all excellent and I love them all. The song writing is peerless, along with the musicianship and production. ‘Scam’ made it as my number one purely because it contains my favourite Dan track: ‘Don’t Take Me Alive’ – more of that later.

So what makes this album so good? Well, all of the above and then some. It might be said that this was a transitional album. After the 1974 release of the mighty ‘Pretzel Logic‘ (MCA), the ‘band’ that was Steely Dan fell away after the two leading lights and songwriters, Walter Becker and Donald Fagen, decided touring wasn’t for them.

In many ways this was a shame to me. Jim Hodder was a fine drummer and also singer on their first album. Similarly Jeff ‘Skunk’ Baxter, who was to join The Doobie Brothers, was a wonderful virtuoso guitarist who had contributed some fine work of his own on the first three albums.

From 1975 and the recording of ‘Katy Lied‘ (MCA) onwards the Dan would rely more and more on a succession of top notch session musicians to raise the quality of their recordings.

By 1976 musicians like Carlton and drummer Bernard Purdie were featuring in the recording of this album. When it was released the reviews were not too positive, yet when I first heard it as a precocious teenager, I was simply blown away. I had heard all their previous albums, thanks to a guitar playing friend who was into all things American.

Even so, the first track and single, ‘Kid Charlemagne’, to me did not sound too promising at first. It began with a funky, yet heavy sounding electric piano, though the song builds into something wonderful by the end. It tells a rather typical Dan story relating to drugs and associated wild lifestyle.

This track doesn’t have one but two brilliant guitar solos by the irreplaceable Larry Carlton. The most revered, in the middle of the song, is often ranked as one of the best ever guitar solos. The outro solo is, to my mind, almost as good.

Track two is one of my all time favourites, ‘The Caves of Altamira‘. It is apparently largely based upon a children’s book by Hans Baumann about a visit to the famous caves in Cantabria, Spain. This is typical Steely Dan, a jazz-fusion oriented song that sends you on a journey back into the mankind’s murky past, basically enlightening your imagination. Great tenor saxophone solo too by John Klemmer.

Then comes my favourite track of all, ‘Don’t Take Me Alive’. It is unusual in that it must contain the best ever guitar intro of all time, played once more by the inimitable Carlton. The song is about a lone, desperate terrorist, seemingly ill at ease with his own thoughts as the situation worsens. There is also a lovely, understated guitar figure before the final chorus, which to me suggests the individual flying through the air, maybe jumping out in a kind of release.

‘Sign in Stranger’ is another great track with much humour and word play. A great guitar solo by Elliott Randall. ‘The Fez’ is one of those rare Dan tracks that has a third writer, namely piano player Paul Griffin. To me this track also points more towards the style of music the ‘band’ would create more exclusively on ‘Aja’ and ‘Gaucho’ in years to come.

‘Green Earrings’ continues this more rock-fusion, funky trend on side two of the vinyl version, with wonderful guitar work by Denny Dias and Elliott Randall.

‘Haitian Divorce’ is one their better known songs and singles, relating a sad, yet somehow humorous tale of a failed marriage. It is also one the Dan’s few nods to reggae.

‘Everything You Did’ is one of those songs which grows on you. At first listening it perhaps sounds like the weakest track on the album, yet its quirky story line and fine Carlton guitar work lift it. It is most noted for the line ‘Turn up the Eagles the neighbours are listening’, a possible reference to the pre Joe Walsh Eagles and their quieter, country rock influences. The line carried enough wait for a reply to be made in a much more famous song later in 1976, namely ‘Hotel California’.

The title track, placed unusually at the end, is surely one of Steely Dan’s most underrated songs. The story is straightforward enough about the experience of immigrants in NYC, yet what is unusual is the songwriters’ serious social conscience, which isn’t normally on display.

So that’s my take upon ‘The Royal Scam’. It has its critics, yet it contains virtually everything musically, with references to their past and future development. It is more polished than their earlier albums, but not nearing the point of ‘over production’ as heard on ‘Aja’ the following year.